"Keep on moving" seemed as a challenging workshop right from the start: the only presentation of the Convention to be held outside, with a lurking  fear of low temperatures and rain and people perhaps feeling apprehensive as to what they should expect.

The three presenters, however, Theodora Papapanagiotou, Nick Maragkos and Penelope Tourtourea, greeted attendees with a big smile and a lot of enthusiasm and began to explain their vision for an innovative approach to language teaching; the philosophy of movement and physical activity. After a detailed analysis from Nick Maragkos on how each activity is designed to keep learners active while they are learning, it was time for action. Theodora Papapanagiotou started giving clear directions for all activities and games to follow.

The workshop started with a ball game, where attendees formed a circle and one of the presenters stood in the middle. The ‘teacher’ announced the theme, for example ‘fitness’, and threw the ball in turns to the attendees, who had ten seconds to come up with a related word. The players who did not find a word in the given time had to leave the circle. An easy game with a lot of potential for classroom use and with students of all ages.

The second activity was a variation of the ‘running dictation’, during which attendees had to memorise a sentence and race to write it on a blank piece of paper set on the back of the person  in front of them. It was an exhilarating experience for everyone, as trying to remember your sentence after running and making sure it was legible proved harder than expected!

The third activity was even more challenging; the direction game. Attendees were put in teams of two, one person from each team was blindfolded and the other had to lead them to the appointed spot without touching them, only by giving the specific directions provided on each team’s map. It was such a great experience, all teams were focused on their task and, even though there were moments of near frontal collisions, everyone managed to finish the activity successfully and in one piece!

The balloon game was the fourth challenge for the attendees. In teams of two once again, one member had to run and get a balloon, race back to their partner, burst the balloon using their hands and... use the words written on small pieces of paper inside the balloon to form an idiom and explain its meaning! An excellent way of practicing language and staying active and excited.

The workshop closed with a session of breathing and stretching exercises presented by Penelope Tourtourea, to help attendees relax after such an active set of tasks, and it was just what everyone needed.

"Keep on Moving" was a truly inspiring workshop, delivered with precision and enthusiasm by the three presenters and which provided attendees not only with alternative ideas to use with their students but also with a different perspective on teaching. Everyone who attended was left with the best impressions and the reminder that keeping yourself as a teacher and your students active and moving during the lesson can have exceptional results in any teaching context. 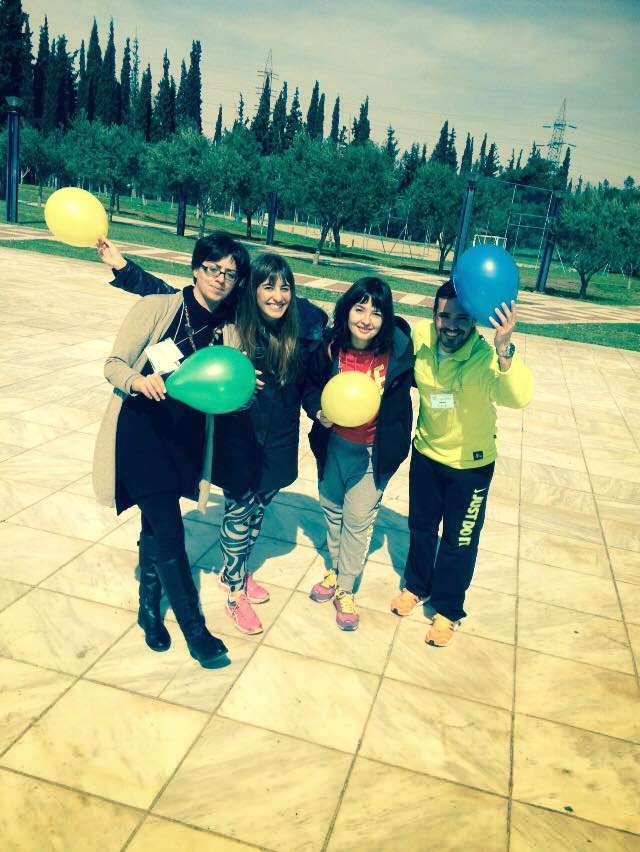 Photo made available by Theodora Papapanagiotou
Posted by Margarita at 01:31