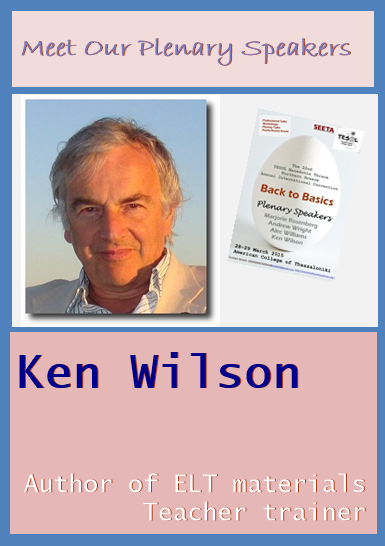 Ken Wilson is an ELT author and trainer. He has written about thirty titles, including a dozen series of course books. His most recent course material includes Smart Choice, a four-level American English course for OUP, and Achievers, a five-level course for teenagers, which will be published by Richmond UK in 2015. He is also editor-in-chief of English 3 and English 4, a co-production between Vietnam Educational Publishing House and Macmillan Hong Kong.

He also writes supplementary material, including sketches and other resource material. In 2008, OUP published Drama and Improvisation, a collection of more than fifty of his drama activities for teachers.

His first ELT publication was a collection of songs called Mister Monday, which was released when he was 23. Since then, he has written and recorded more than two hundred ELT songs, published as albums or as integral parts of course material. He has also written more than a hundred ELT radio and television programs, including fifty radio scripts for the Follow Me series, thirty Look Ahead TV scripts and a series of plays called Drama First.

For many years, Ken was a member of the English Teaching Theatre, a company which toured the world performing stage-shows for learners of English. The ETT made more than 250 tours to 55 countries, including Greece.

Ken lives in London with his wife and two cats, and works in a shed at the end of his garden.

Read more about Ken and his work at https://kenwilsonelt.wordpress.com/

Plenary talk: Only connect - seven strategies for ensuring teacher-student communication in the classroom

Does the conventional classroom, with a teacher and students sitting at desks, have any place in modern learning? Has technology rendered the normal learning environment redundant? It would seem not, as teachers and students all over the world are still required to turn up at a particular time and place and engage with each other in some way. However, in classrooms where technology is available, has this engagement changed radically? And what about the students' own technology? Does this make a difference to the classroom experience, or are there some traditional aspects of teaching/learning that should remain the same?

This talk will show how the vital link between teacher and students can be maintained, in a hi-tech classroom or in a situation where the students themselves have sophisticated personal technology.


Workshop: Is Anybody Listening?

Students have three ways of working on their listening skills in class: listening to the teacher, to machines and to other students. Most students do the first two, but not the third. In this talk, I will show how you can encourage learners to listen to each other, for example by using the power of images and also with instrumental music. The amazing activities will have you listening intently to each other to complete the tasks.
Posted by Margarita at 02:05