What is Logos? How can literature and philosophy be effectively used in teaching and learning?

Vassiliki Mandalou greeted her attendees with a visual prompt: a simple paper with an equilateral triangle containing the word Logos. She then proceeded to move their thoughts away from the common interpretation of ‘logos’ as a brand and to elicit the true meaning hidden within the word: the triad of logic, argument and language.

Taking attendees through a journey along several different excerpts of poems, novels and quotes, she argued that thoughts are first born as emotions and that literature is, in fact, philosophy. Within her handout, Lee Carol, Khalil Gibran, Emerson, Kazantzakis, Socrates, Wiesel and the mighty ‘Anonymous’ writer led attendees to discuss issues faced by both teachers and learners alike; virtue, ethics, facing doubts and fears, the philosophy of giving, working with love and teachers being spiritual parents. Vassiliki went further into exploring how we move from critical reading to critical thinking, by telling us to invite learners to question what they read and come in contact with, to put everything under trial and reflect on the discoveries they have made. She pointed out that making an effort is a reward in itself, that we should accept mistakes as proof of moving ahead and that the true purpose of a teacher is not to boast about achievements but to touch as many hearts as he or she can.

Her presentation brought forward an interesting discussion among the attendees, with doubts being expressed and further points being made.

An inspiring presentation that certainly gave attendees food for thought and portrayed literature as a useful tool for teachers of any context, while adding the thought that philosophical questions are in fact simple, everyday questions. 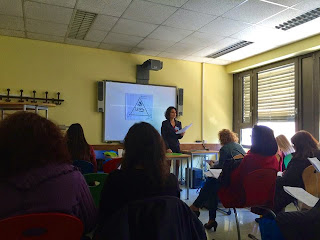