Jasmina Milicevic in her workshop lead the participants through the creative process used to raise awareness of students on the issue of bullying in schools and empower them to deal with this problem. 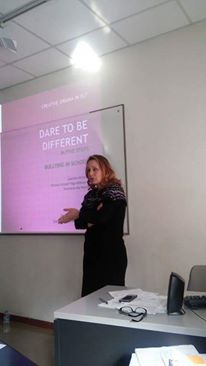 Photo by Vassiliki Mandalou
The participants were presented with the stages of the creative process by taking part in several activitities using drama techniques starting with the game ACT OUT YOUR NAME as a warm-up and set ourselves in the acting mood. In the continuation a short SURVEY on bullying took place,  the step which provided students-aka the attendees- with the basic knowledge and vocabulary connected to the topic. In the the next stage the participants were split in groups of four with the tasks to make TABLEAUS or FROZEN PICTURES presenting a certain type of bullying by using the gestures from the first activity. That was the active representation of the drama approach.

To make it more challenging, the groups will be asked to add words and movements in the activity DEFROST YOURSELF and so create a dialogue or rather a short sketch. The final stage of the workshop represented the introduction of the FORUM THEATRE principles by changing the above mentioned sketches in search of the solution to the problem. Thus we were introduce on how through a collaborative team work we can TOGETHER solve a problem , which may seems different but actually is so very alike to all students in the tender age of pubity. 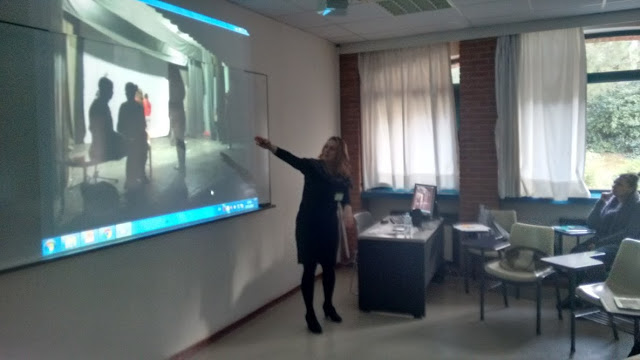 In general lines through this workshop  was presented how a creative process in an ELT classroom can result in a whole play or a sketch tackling some problems teenagers face in their everyday lives. By using different drama techniques such as forum theatre , improvisation,spontaneity our learners can hopefully present their dramatic view of the solution to a problem given to them. In her opinion is the English teachers the ones to teach the students 21st century skills and by this term Jasmina Milicevic does not only consider the digital literacy but also the social skill such as accepting diversity, tolerance, creativity , understanding , team spirit and daring to shaow that being different is a positive thing and can add more variety to the society.

Email ThisBlogThis!Share to TwitterShare to FacebookShare to Pinterest
Labels: TESOLMTh16