Ms Foteini Malkogiorgou has been an EFL teacher for over 25 years and an EAP instructor in higher education both in Greece and the UK. Since 2013, she has been the academic director of the English department at New York College (NYC) and tutor for the undergraduate courses foundations of linguistics, and the methodology of language teaching, of the BA (Hons) in English and English Language teaching of the University of Greenwich which is offered by NYC. In her talk, Ms Malkogiorgou presented a theoretical background on children’s foreign language education. Her project and main academic interest focuses on recent research in the field of neuroscience and the theories of learning which she kindly shared with us. As she indicated, children have only one path of learning and that is acquisition (Krashen & Terrell 1983). Children learn through experiencing the world that surrounds them (Piaget, 1997) and as social beings their development and learning is a product of their social interaction (Vigotsky, 1997). 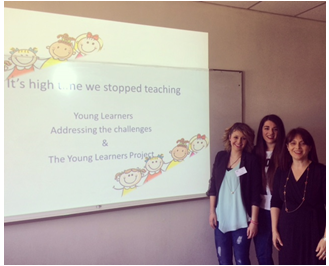 Photo by Fani Miniadou
Neurolinguistics research has shown that social interaction “gates” language acquisition and that perception of speech is critical because being able to discriminate word boundaries (discriminating one word from another) correlates with acquisition (Kuhl 2010; Jusczyk 2014). Neuroimaging techniques also tend to show that the right hemisphere of the brain (RH) plays a key role at the beginning of the language acquisition process. The RH (non language-dominant) facilitates language processing in the left hemisphere and it adopts a holistic strategy to make the language learning process easier in its initial stages. As children, at least till the age of 10, have not yet developed grammatical “automatisms“ they rely on imagery and holistic thinking to tackle the acquisitional problems. In their world there are no tenses, nouns, adjectives there are no schemas labelled ‘grammar’ (Paradis, 1994).

Inspired by the work of well-known linguists, cognitive psychologists and researchers and her intrinsic motivation and love for children, as a mother of one, Ms Malkogiorgou has launched the “The Young Learners Project” a volunteer project offered to children of a non-profit organization for the protection of children’s rights («Το Χαμόγελο του Παιδιού»).  The volunteer project aspires to be also offered to other organisations that protect children in need. Vasiliki Papadopoulou and Maria Spiliotopoulou two graduates of the BA in English Language and English Language Teaching of New York College who participate in the project as volunteer teachers presented some of the resources and techniques they use to facilitate L2 acquisition in the language classroom. 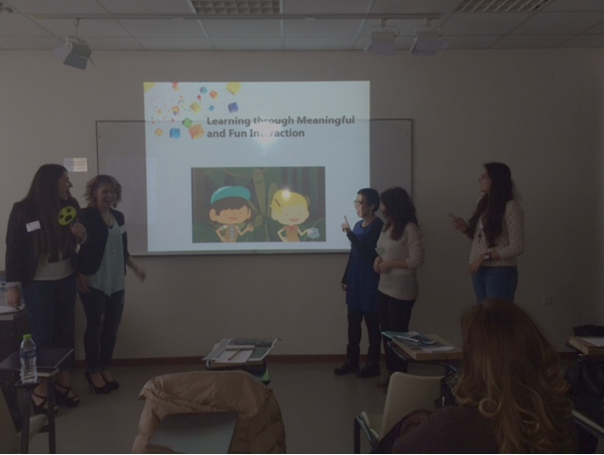 Vasiliki and Maria explained the spine of their cyclical task-based syllabus, a non-linear syllabus which treats learning as a dynamic process and which uses stories, arts and crafts, games and play, multisensory input, psychomotor behavior to encourage meaningful interaction. Task-based learning shifts the focus to the process of attaining an objective while language is a byproduct that children pick up effortlessly and naturally; as was the case with the words “cut”, “scissors”, “glue”, and chunks such as “press and hold” in an arts crafts Bob-Sponge project. Maria and Vassiliki involved the audience in a lively workshop offering them the chance to experience learning through the eyes of a child. Responding to their instructions, we drew an elephant. As the workshop progressed, the two joyous teachers got us dancing and miming animals and descriptive adjectives. They used a holistic approach and means to engage all types of learners in the activities. There was a children’s video song and a choreography that responded to the action verbs of the lyrics. Using beautiful carton cutout animals they animated the story of the “Sad Elephant” which later the audience took over to animate as Vasiliki was narrating the story. 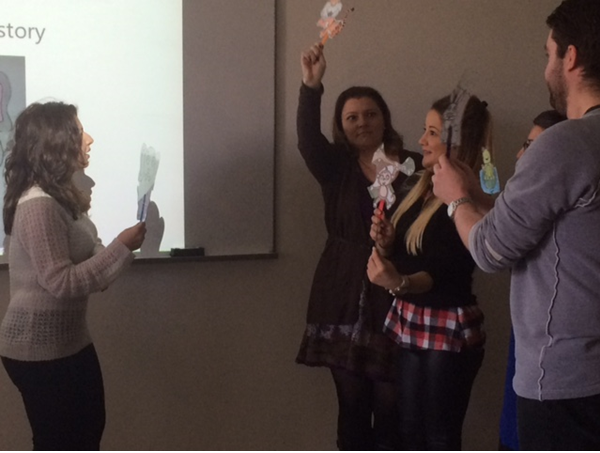 All in all, Ms Foteini Malkogiorgou and the two volunteer teachers, Vasiliki Papadopoulou and Maria Spiliotopoulou, shared with us the theoretical background, the techniques and practical supplies, and allocated the challenge to the educator to build on children’s natural orientation to meaning and communication. The suggestion is that the first two years of children’s foreign language education explicit teaching of grammar and lexis, and reading and writing should be avoided while facilitating their understanding of speech, promoting holistic strategies for meaning, creating an environment rich in multisensory input, psychomotor responses, authentic resources and tasks that offer opportunities for meaningful interaction will eventually lead to language acquisition and spontaneous production. The results can be magical!

Email ThisBlogThis!Share to TwitterShare to FacebookShare to Pinterest
Labels: TESOLMTh16