Theatre: “All the World's a Stage: Celebrating 451 years of Shakespeare” - Report

Luke and David do not need a special introduction. They are the famous “Dave ’n’ Luke” English Teaching Theater Group in the ELT world. Those of us who attended the 22nd TESOL MTh Annual International Convention had the great opportunity and pleasure to watch their latest work, “All the World's a Stage: Celebrating 451 years of Shakespeare.”


The play begins with two women on stage. They play the role of the narrator. They state that man's – or woman’s – life is like the theatre. Men and women play many parts in their lives. Different stages in life, different roles to play: infants, school children, lovers. At this point, Dave 'n' Luke's script does a clever twist and lures the audience into Shakespeare's time. Did women have the opportunity to become educated in Elizabethan times? Were they allowed to go to school? Another twist in the script is when the two narrators decide to find the information about women's education in Shakespeare's time on Google! It is a clear implication that Shakespeare's plays still appeal to the modern world and his views on human relationships remain up-to-date and relevant. 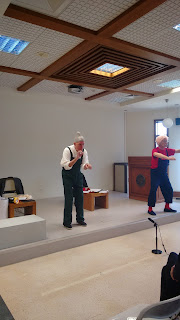 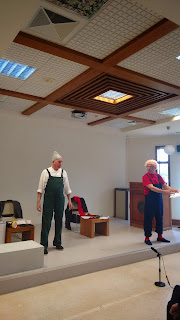 And what does love have to do with the roles we all play in life? How is love seen in Shakespeare’s time? Romeo and Juliet, of course, are a famous example of ‘star-crossed’ lovers – young lovers whose parents disapprove of their choice of partner. The ultimate love story of all times. And the cue to move to the main part of the plot.

The Narrators say that a group of working men, members of an amateur theatrical group are gathered to rehearse another love story, “Pyramus and Thisbe”. The fact that the group consists only of men indicates that in Shakespeare’s time the roles of women in the theatre were played by men which is a significant sociopolitical and cultural element. Considering the idea that Dave ‘n’ Luke had to choose women for the role of the narrator the interpretation is clear. An evolution on gender perspective and performativity has occurred since then.

At this point, the narrators introduce the main characters of the story to the audience. Peter Quince, the carpenter, and Bottom, the weaver. Peter Quince is the director and Bottom is the actor. The cast is almost ready. Romeo and Juliet are going to be put on stage. All they have to take care of is the last details, the final direction and the props that they will use in the scenes. 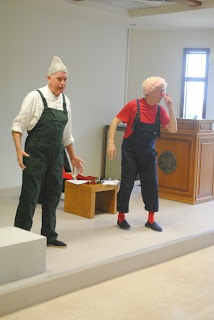 The great interest and educational value in Dave ‘n’ Luke’s play is how they integrate Shakespeare’s lines into their script and how they successfully convey their meanings to the audience in a mixture of Elizabethan and modern English. How interactively they use body language and movement in order to engage the audience in the action taking place on stage. Finally, how cleverly they use props like wigs, flowers and a torch in order to create the proper visual effect.

Last but not least, humour plays a very important role in Dave ‘n’ Luke’s script and along with elements of grotesque and exaggeration in articulation create a very entertaining and hilarious production.