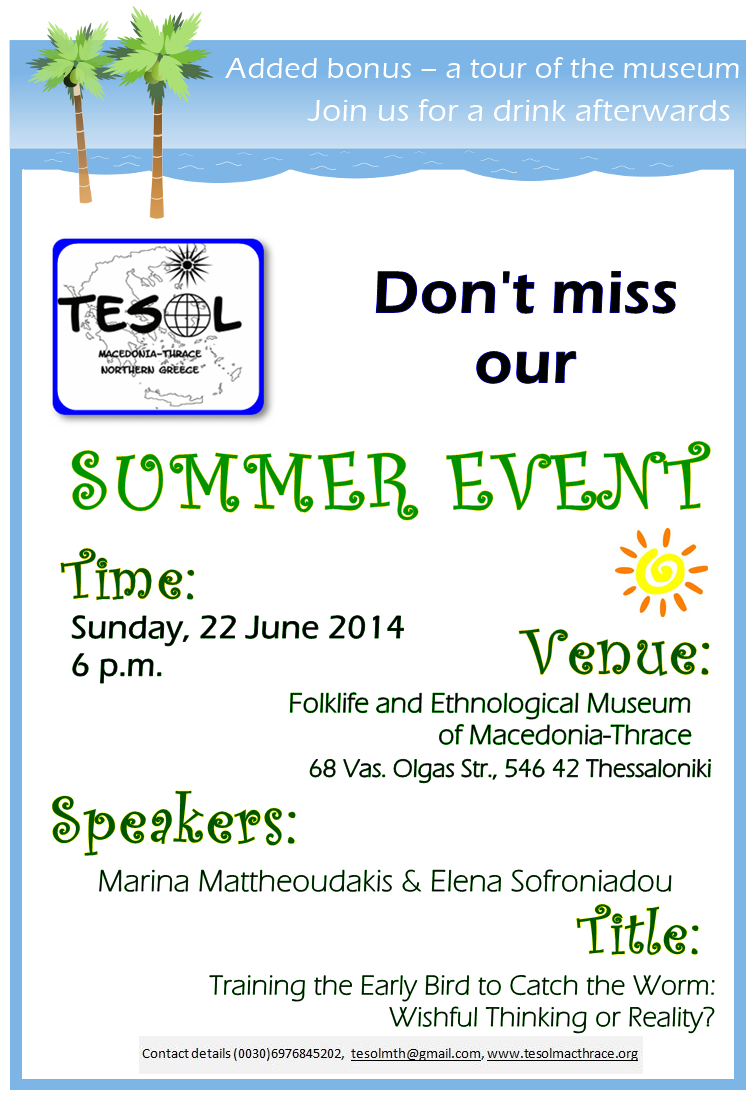 Training the early bird to catch the worm: wishful thinking or reality?


The recent introduction of foreign language instruction to the early grades of primary school in Greece is in tune with the widespread tendency in Europe for an earlier start in L2 learning (PEAP, 2010). The 3rd Model Experimental Primary School of Evosmos, Thessaloniki, was the first state school in Greece which introduced English language teaching to first graders in 2008. Following the latest research in early foreign language education (Edelenbos, Johnstone & Kubanek, 2006), the syllabus and methodology adopted at school take into consideration and build upon young learners’ needs, skills and abilities. In particular, the L2 instruction at school (a) places emphasis on the development of oracy, (b) takes into consideration young learners’ learning styles and kinaesthetic characteristics, and (c) provides them with rich L2 input both in class but also in extra-curricular activities. In this experimental school, language classes are held 5 hours a week but further L2 input is provided through the CLIL method in Physical Education and Arts classes. The particular school has adopted and implemented a different L2 curriculum from that promoted in the rest of the Greek state schools and our presentation aims to analyse the rationale of our choices and their practical implementations in class.

Bios:
Elena Sofroniadou teaches English at primary schools but she has been working as an English teacher ever since she was an undergraduate. She holds an M.A. in Theoretical and Applied Linguistics from the Aristotle University of Thessaloniki and the Cambridge RSA Diploma for Overseas Teachers of English (DOTE). From very early, she became a TESOL Macedonia-Thrace, Northern Greece member and later she was elected on the Board as a PR officer (1999-2001) and as a Chair in the years 2001-2003. She participated as a teacher trainer in several seminars in Northern Greece. She is very keen on doing research for the teaching of English in the primary schools in Greece. Her main interests lie in teaching young learners, in using literature and drama in the EFL classroom and in doing project work. She’s been an English teacher at the 3rd Experimental School of Evosmos for 6 years.

Marina Mattheoudakis is an Associate Professor at the Department of Theoretical and Applied Linguistics, School of English, Aristotle University of Thessaloniki. She holds an M.A. in TEFL from the University of Birmingham, U.K. and a Ph.D. in Applied Linguistics from the Aristotle University of Thessaloniki. She teaches courses in second language acquisition and language teaching methodology at both the undergraduate and graduate levels. She participated for two years in a European project aiming at the social and educational inclusion of immigrants in Europe (2001-2003) and she was also the coordinator of a European Research Project for teachers of modern languages (2003-2007). She is currently participating in four European projects on issues related to foreign language learning and teaching. She is one of the designers and compilers of the Greek International Corpus of Learner English (GRICLE, University of Louvain, Belgium). Her main research interests lie in the areas of second language learning and teaching, corpora and their applications. She has presented her research work at several national and international conferences and has published in international journals, books and conference proceedings.